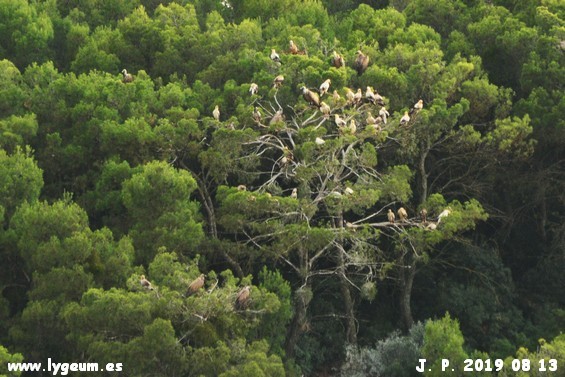 The NGOs “Friends of the Earth Aragón” and “The Naturalist Association in Aragón (ANSAR)” are fighting against the building of several wind farms in Sierra de Luna (Zaragoza, Spain). These new farms are close to the largest Egyptian vulture (Neophron percnopterus) roosting site in northern Spain. The Project is to install 162 wind turbines, some of them only 500 meters far from the main roosting places.

This roosting site has been regularly monitorized by researchers of the Biology Department of the Doñana Biological Station of CSIC (Spanish Council for Scientific Research. Up to 100 individuals can be seen daily in this roost with a large turnover of birds. It is used by birds of the Ebro valley, Catalonia, Pyrenees and southern France, a region holding the “almost a quarter” of the European population of this species is also used by vultures from France so that the maintenance of this communal roosting site is crucial for conservation of the species at an European scale. The Egyptian vulture is listed as a worldwide endangered species (EN) by IUCN. Research projects carried out in other Spanish regions as Andalusia have shown that accidents in wind farms increase the mortality rates of the vultures jeopardizing the long-term viability of the populations.

Egyptian vultures have been roosting in Sierra de Luna for at least 30 years. In spite of the great information that has existed for decades, the Government of Aragon and the promoting companies completely ignored the existence of this place of concentration of vultures. After the first advertisements, the Aragonian administration has refused to review the Environmental Impact Statement (DIA) although legal regulations would allow the modification of the project if new decisive aspects are brought forward.

Even with these shortcomings, in its report, the Government of Aragón considers that the building of these new wind farms in the Sierra de Luna severely will harm the bird populations existing in the area: “Foreseeable mortality of many sensitive species, specially those with a low reproductive rate (griffon vulture, Egyptian vulture, golden eagle, bonelli’s eagle, short-toed snake eagle, red kite etc.) may be so high that, together with other threats, they could jeopardize in the medium term the viability of populations of these species”.

Experience has shown in Cádiz and Navarra that when wind farms increase mortality of young and adult Egyptian vultures the consequences in the population can be catastrophic, jeopardizing the future of their population.
The NGO Fondo Natural has promoted the campaign SOS-Alimoche (Egyptian vulture) in change.org and nearly 60,000 people have already signed. It is supported by ANSAR (Naturalist Association in Aragón), Friends of the Earth in Aragón, Gurelur (association for the defense of Navarra’s natural values), Association Friends of the Vulture, Foundation for the Conservation of the Bearded vulture, Foundation for the Conservation of the Black Vulture, Foundation Mediterranean Wildlife, Association Migration and Nature and SEO/BirdLife.